Posted by Dave in E-Democracy

Today was most enjoyably spent at the Digital Inclusion conference, with David Wilcox, doing some video and other social web stuff on behalf of DC10plus. 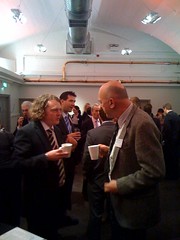 We decided that, rather than drown DC10plus’s own blog with everything we produced, we would host our own blog featuring everything we did, from which people could take what they chose.

Our blog is at https://dc10plus.socialreporter.net - hosted at RuralnetOnline on their WordPressμ platform. This enables us to create minisites quickly at the socialreporter.net domain for any future events too, and maybe even building up a portfolio of work. David and I will be doing some more formal blog posts for the dc10plus blog over the next day or so, but for now the current arrangement gave us complete control over how stuff was displayed (such as embedding Qik video…) and just let us get on with the job.

We also used the blog to aggregate the bits of content around the web tagged up with dc10plus by embedding del.icio.us bookmarks in the sidebar, along with bits posted on Twitter with the dc10plus hashtag. Photos were uploaded to Flickr throughout the day and tagged, and again aggregated in the sidebar. WordPress really does make this stuff so easy.

I took my digital camera along, but didn’t use it. Much easier to take photos of the iPhone (did I mentioned I’ve got an iPhone? It’s beautiful. I am now of the opinion that you aren’t really a proper person unless you have one) and email them straight to Flickr. The quality is perfectly adequate for the web and the ease of use is something else.

The real story was in the video though, and we managed to get plenty done. I am slightly limited technologically speaking, because my camcorder hasn’t got an external microphone, meaning that I really couldn’t use it in crowded, noisy spaces. But while the conference sessions were going on, I managed to pin down some exhibitors to get the skinny on what they were up to. Hopefully the results were useful, like this with Bob Holmes of Digital Unite, who tells a nice story about how the social web can bring older family members back in contact with their families:

I used YouTube to host my efforts, with minimal editing. One slight pain is that the Sony Camcorder doesn’t like talking to my Mac - fortunately I brought my Vista laptop along as a backup. The wifi at the location (The Brewery near the Barbican) was excellent, and th uploads took no time. Videos were online and on the blog within 20 minutes of them being taken. 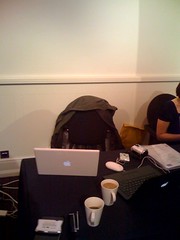 Meanwhile, David wandered about grabbing people for interviews, using both Qik and blip.tv for hosting. Using different services is good, offering slightly different things, but all can be aggregated in the blog, so it doesn’t really matter too much.

Things we learned? Organisation is important. We needed our own table, rather than sharing the DC10plus one (not that we weren’t grateful…) but the volumes of kit and wires meant we could have done with our own space. We were also still experimenting with various bits (embedding Qik in WordPress, getting hashtags to work) into the morning, which was a little too much brinkmanship, probably. But we have the basics in place, though, and the WordPress platform is the key to it all, really.

It’s definitely a two man job, though - possibly three if you want to have the actual conference sessions live-blogged too. I’m definitely up for doing some more, and it’s one of those things that you can only get better at with experience.

I’d like to thank David for letting me have a go - and to the folk at DC10plus for taking a punt on having us hang around, recording stuff. I hope the results work for them, and help get some of the messages across.

Update: Shane McCracken has blogged his thoughts on our efforts.

6 Responses to “A day’s reporting”