Amazon have just relaunched the Kindle e-reading device in the UK, with a new model, which looks rather spiffy. 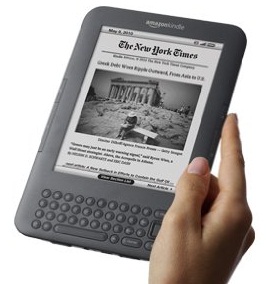 Mine is one of the old, white ones – but I still love it. The new one features a new layout which makes the device smaller overall but keeping the same sized screen. The Kindle now supports wifi, which is cool – mine can only use 3G networks.

As John Naughton writes in his Observer column on the subject:

In the end, however, it’s not hardware that matters, but the effectiveness of the overall system in which the device is embedded. That was the great lesson of the Apple iPod: although the hardware was lovely from the outset, it would never have had the impact it had without the link to iTunes software on the PC/Mac and thence to the iTunes store. Other companies had made nice MP3 players, but none had put together a seamless system for getting music from CDs or online retailers on to them. Apple did and the rest is history.

The evolution of the ebook business reveals the same kind of pattern. First up, in 2006, was Sony, with a beautifully crafted device that had one crippling drawback: the difficulty of getting stuff on to it. A year later, Amazon launched the first-generation Kindle, a device inferior to the Sony product in every respect save one: it had wireless connectivity to the Amazon online store, which meant that purchasing and downloading books on to the device was a breeze. After that, it was game over for Sony and, indeed, for all the other companies that had piled into the e-reader market.

There are a number of cool things about the Kindle, some of which are unique to it, some that aren’t. Here are my top three.

As John points out in his article, the iTunes-like ability to buy books right away is remarkably powerful. It’s like the difference between ordering a CD online or downloading an MP3 – why wait a day for it to be delivered when you can have it now?

One thing the Kindle allows you to do is to set bookmarks in your e-books, and also to annotate them with notes. In addition to this, you can also highlight passages to make sure you remember them.

A social layer has now been added to this, in that you can now see what other people who have that book on their Kindles have highlighted. It’s a bit like seeing how many other people have saved a web page in Delicious, and is very cool.

As well as the Kindle e-reader device, Amazon make applications available for other hardware to read books on, including Mac, Windows, Android and iPhone. This enables you to download books to other devices and keep reading even when you don’t have your Kindle on you.

Most obviously useful for phones, the really great thing with the Kindle is the way that when you open a book in one of the apps, it opens on the last page you read on your Kindle. Likewise, when you then open the book on your Kindle, it catches up to where you got up to on the other device.

This entry was posted in Reading and tagged amazon, e-books, e-reader, kindle, naughton. Bookmark the permalink.

2 Responses to Yay for Kindle