I’ve long considered LinkedIn to be one of the most boring websites in the world, and as I described here, I rarely use it when not prompted to by an email alert demanding my attention.

However, the first rule in any digital engager’s book should be “don’t assume everyone likes (and dislikes) the stuff you do”. Just because you think a certain site sucks doesn’t mean everyone else does!

This is definitely true of LinkedIn, which is seeing considerable growth and large amounts of activity, especially amongst the business community.

Here are some examples of how public sector organisations are using LinkedIn to engage.

The Secretary of State for Justice is using LinkedIn’s Answers function to find out what business owners think “what one thing could the Government do to help your business in the current climate?”

There have been 171 responses so far, which isn’t bad going, I don’t think.

Thanks to Steph for the tip on this one.

The UKTI group on LinkedIn is remarkably active, with people working in business and government having regular discussions with one another, and those working in government.

As Cass Martin – erstwhile member of the digital team at UKTI – tweeted, “the UKTI group on LinkedIn now has 5000+ members. Customers, exporters, investors, staff all chipping in. Lively debate!”

an opportunity to reflect on the performance of the Walsall Economy, and to shape the future direction of economic development in Walsall.

Early days yet, but a great example of informal consultation done in the space where those who would be interested are already hanging out. 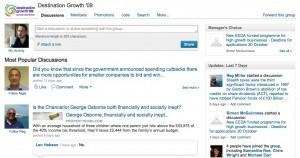 EEDA created this group for networking before and after a conference they ran, called Destination Growth, in 2009. That it is still going strong now goes to show how much desire there is out there for conversations between business people and those in the public sector working on their behalf.

Four is a rather odd number, but as I said at the top, I find LinkedIn quite dull at the best of times. If you have any further examples, pop them into a comment!