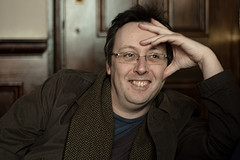 I had the pleasure on this lunchtime of spending time with Nick Booth – the man (the legend?) behind Podnosh, and the phenomenon that are Social Media Surgeries. What I love about Nick is that he is a connector – he knows government, and he knows communities – and he introduces them to each other all the time, on the web or in real life.

Anyway, this isn’t a post (just) about inflating Nick’s ego. We spent an hour and a half discussing business, the state of local government, where our own relevance might lie in these austere times, and that sort of thing. We naturally ended up discussing the Big Society, what it might actually mean and how it might actually work.

We probably didn’t cover much ground that others haven’t, but it was a useful discussion. I think that what I took away from it most of all was the idea that the lack of money to fund civic activity should be seen as a feature, not a bug.

In other words, don’t complain about there being no money attached to the Big Society. Make the point of it doing stuff that doesn’t need a grant to work. If your idea can’t operate without funding, maybe this is the wrong time for that idea.

Last night, on Twitter, my attention was grabbed by another Birmingham resident, Andy Mabbett, who posted up a couple of tweets tagged with #smallsociety. His point was:

do one small thing each day, to make the world around you better…Imagine if we all picked up one piece of litter and put it in a bin; or reported one pothole or faulty street light.

I love this idea. It also ties in beautifully with one of my favourite phrases to describe the internet, David Weinberger‘s ‘small pieces, loosely joined’.

Perhaps the big society is just lots of small societies joined together. Maybe the internet could be the adhesive.

I’ve been accused of “big society romanticism” by Patrick Butler in the Guardian. I refuse to accept such a charge lying down!

I’m not saying this funding-free environment is a good thing. But it is a thing, possibly the thing and all I was doing was to point out that maybe it’s a change in mindset that’s required to get through the next few years, and make the most of the fact that the big society agenda – whatever its faults – has some serious backing in government.

Do I see a funding-free utopia ahead, where the gaps in public services are filled by willing volunteers, suddenly happy to give up their time to do the stuff they have got used to government doing for so many years? Of course not.

But I also think that dismissing attempts to think positively about the position we are in as ‘romanticism’ isn’t going to get anyone anywhere.

5 Responses to Big and small societies