Reflecting on Local by Social

I wrote up quite a bit of what was said at the Local by Social event yesterday, but didn’t add much in the way of comment or analysis. This post makes up for that. I’ll try and sum up what the themes were for me which really stood out.

First of all, of course, great work FutureGov and IDeA! 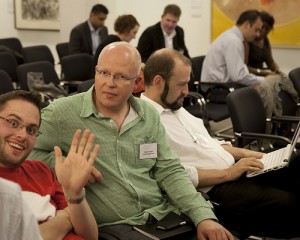 Me, Steve Bridger and Lloyd Davis, by Paul Clarke

1. We probably are moving on from talking about social media

I did think just how far things have moved on in the last few years. I remember conversations had with Steve Dale back in 2006 when it seemed like nobody else in local government was remotely interested. Now it seems like most authorities are at least aware of the developments in the web and how citizens are using it – and are starting to think how they might engage with it.

I think that ‘social media’ as being seen as a distinct element of activity is starting to disappear, with some bits heading into comms, other bits into web teams and so on. Our project with Central Bedfordshire, Let’s Talk Central, was delivered through the consultation team, for example.

In other words, using social media tools is becoming less of a thing, and more just a set of skills for delivering tasks and activity, which is almost certainly the right thing to do.

However, it still seems to be that comms and marketing folk are those most often attracted to events like this, which is a shame as service managers and policy types need to be a part of this conversation too.

Much of the discussion at Local by Social was not about using social media but what was made possible by social media – which is a healthy way of looking at things. Much of this is focused on relationships – between government and governed, service designers and users, between individuals living in an area.

If anything local government should be looking to foster relationships and take an active part whenever it can. Reinventing relationships too, where necessary – giving people power to organise stuff for themselves where they want to, only stepping in when needed.

Another relationship to be rethought is between government and supplier, of course. All the presentations from social innovators were from small organisations which may not fit in too well with existing procurement systems and whatnot. To tap into these great ideas and enthusiastic people, process might need to give way.

Following on from this, councils must think strategically about what it is they are trying to achieve rather than what is being done and who is doing it. It may well be that patchworks of service delivery models are required – some areas may have residents who can organise themselves, others may not.

It looks like a lot of the discussion around efficiency savings in local government is focusing on reducing staff numbers, restructuring and cutting services. In other words, doing the same things, only cheaper. This means councils could fall into the trap of doing the wrong things righter as opposed to taking the opportunity to really rethink who delivers what and how.

Another key message from the day was that this is exactly the time for local government to throw off its shackles, rethink approaches to risk, and embrace innovative ways of working. I guess this comes down to attitude – is innovation a costly luxury, or a vital part of meeting demand in a time of cost cuts?

For a forward thinking person, the latter is obviously preferable, but is it likely to be the route taken by most local government managers? I’m not sure. But those that do will find themselves getting ahead of the rest.

Of course, who actually does the innovation is an interesting question. As I have mentioned above, the council’s role in this innovation might just be to pass the work onto someone who can actually do the innovating…

More and more I’m drawn back to what I posted about 18 months ago – that government should get away from the idea that for something to be useful it has to be very serious and dare I say it, boring. The greatest example of this at Local by Social was from Do the Green Thing, a wonderful campaign about getting people engaged in being a bit more environmentally aware. Take their videos for example, simple, funny and memorable:

Again, this is exactly what Let’s Talk Central is about – we don’t want to force people to read huge documents, or fill in surveys with hundreds of questions, or make them send emails into black holes from which they never get a response. We wanted to get people to talk about what they are interested in, using a medium they are comfortable with, in the space where they like to go.

For me, this is the most important thing to fix, and it’s probably the easiest of them all as well.

Further coverage of Local by Social:

Great thought provoking stuff as ever.

You are right when you say:

But what you don’t say is why this is the case.

If it is the most important thing to fix then don’t we need a theory of why it happens in the first place?

Don’t we need a clear basis on which we can decide whether things can change and, if they can, then how far?

Otherwise shiny new social media tools might be waved at local government to no avail. Or have there been enough ‘adopters’ to convince that change is here to stay?

I realsie it probably wasn’t part of the day but would be intrested to see what you think anyhow.

Or am I just being boring

I think this post is spot-on in terms of the problem.
Folks aren’t interested in official communications. They are cynical and skeptical of big institutions. Until service providers and administrators can get past being bureaucrats (speaking for the organism), and instead develop relationships with constituents that are genuine, open, and trustworthy (one-to-one)– then social media won’t work.

And I think government taking social media and using it as a megaphone for press releases is the wrong idea.

I talk about this all on my blog…

Good questions all! The thorny issue of culture was raised several times on Wednesday, and as I have written about several time here, in other posts, it’s something that really needs to be tackled before local government can meet the challenges of the day.

However, people have been talking about changing the working of culture of government for decades and nothing has really happened yet. It might be that the financial pressure now will force a rethink – I remain slightly sceptical about that.

So I think therefore it is incumbent on those who are already thinking differently to just get on with things. It is possible for government to be less boring without the whole organisation being involved in a shift of attitude – projects like Let’s Talk Central show that as do your own efforts with scrutiny in Swansea.

The trick will be to use these as examples, chunks of activity that can be fed back into the policy, strategy and business planning processes, with hopefully positive outcomes that can be used to convince the rest of the organisation that change is good, necessary and is likely to succeed.