Yammer gets a facelift

We’re big fans of Yammer at Learning Pool – it’s provided that virtual water-cooler that a distributed workforce really needs. That mixture of work related updates, general chit-chat and abuse that any office needs to function effectively.

If you aren’t aware of Yammer, it’s like Twitter but it is private to the employees of your organisation. It means you can discuss issues that you might not want aired in a public forum like Twitter, but in the similar short, informal way that status applications work.

Yammer has just had a bit of a facelift, and a new bit of functionality that looks really cool. 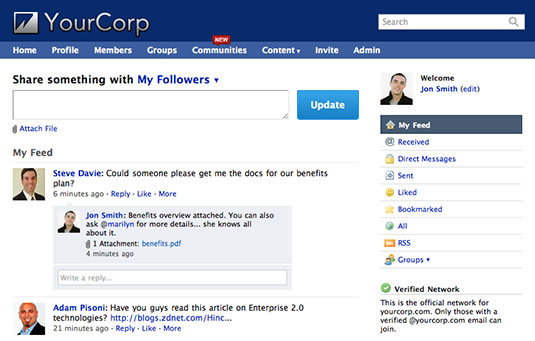 The cool feature is called Communities. Yammer now allows you to create a stream for people who aren’t necessarily part of your organisation to join. This is separate from your organisation’s stream, so you don’t need to worry about outsiders seeing your private conversations.

It appears that you can create as many of these communities as you like, and you can choose whether everyone from your organisation gets added automatically, or you can pick and choose people to join. Then it’s a case of inviting by email those people from other organisations that you want to be in on the action.

This will be a great tool for informally managing project communications between supplier and client, for example, especially when there are multiple partner organisations involved, and where there are several people from each organisation who needs to be kept up to date. I’ll be interested to see how Huddle reacts to this, and whether they will consider adding status update like features to their offering.

Agree Yammer is good. Recently at an internal event we had some live yammering going on, most liked with a few dissenters. Does Learning Pool operate the free version or the paid one? The paid model Yammer offers with a charge per use can work out quite expensive. My thinking was that the paid version would provide better archiving of yams. This is useful for live yammering were quite a yams are generated.

The communities functions I just explored and have set one up. This goes a small way towards breaking out of the bubble that is Yammer.

Next post: Bookmarks for February 24th through February 28th