LocalGovCamp Yorkshire and Humber was a great day, superbly organised by Ken Eastwood, Kevin Campbell-Wright, Melanie Reid and a host of helpers. It was by a mile the least involved I have ever been in one of these events and, to be honest, my enjoyment of it was considerably increased as a result – as was everyone else’s, I should think.

The photos can be found here – or within the whole localgovcamp stream here. I – and hopefully others! – will link to coverage in the group on UKGovCamp.

Partly this was because I could actually attend and take part in some sessions! My thoughts on them follow. 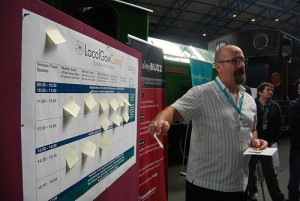 This session was introduced by Martin Cantor of Barnsley Council, and was based around a paper circulated via the LocalGovCamp Huddle workspace (I’ve emailed Martin to ask if I can post it up here too). The vision starts with:

In a world where:

then we have a truly digital world.  In this world, the technology will be not just ubiquitous, but invisible and taken for granted, just as electricity now is.

In other words, we have to acknowledge that technology is changing the way we work, play, travel, shop, socialise and learn. A debate ensued about various aspects of this vision, including questions around what the role of government is with regard to overseeing and indeed implementing the vision. 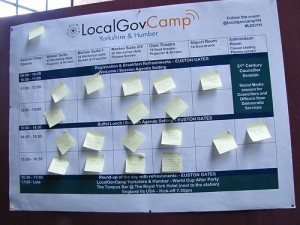 Photo of the agenda by Ingrid Koehler

A session I ran jointly with Ken Eastwood of Barnsley Council. I introduced the session and the concept of Enterprise 2.0 which effectively just means social software behind the firewall.The points I made to frame the session were that

Ken led us through Barnsley’s soon to be launched ‘Buzz’ platform, based on SocialText, where staff will be encouraged to connect with one another, discuss work and non-work related issues and generally break down silos. It looks great, and I’m looking forward to hearing the success stories to come from it.

Again, a discussion then took place, with loads of interesting insights shared and questions asked. One significant area of debate was around the role of IT in all this – interestingly Barnsley have gone with the hosted, SaaS version of SocialText as opposed to getting it installed on in-house IT infrastructure (this strikes me as sensible, and a more service-oriented approach to IT purchasing will be a key element of cost savings and generally doing this better in this area in the future).

The other interesting point was that although deploying enterprise 2.0 is a technology project, it shouldn’t be led by technologists. A successful implementation technologically speaking might mean that everything works, but not that people are actually using it. So, leave the plumbing to the techies, but keep the strategy and direction in the hands of those within the business. 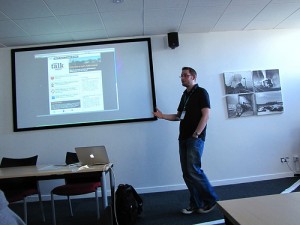 Photo of me by Ingrid Koehler

A session led by me around Central Bedfordshire’s Let’s Talk Central project, which Learning Pool worked on. I did a brief – entirely unprepared – talk about the background to the project and giving my views on consultation activity before opening things up to questions and discussions.

Essentially my point was that a lot of local government engagement and consultation work is incredibly dull and not the sort of thing that would really encourage residents to take part. With Let’s Talk Central, the focus was always on keeping it high level, and just finding out how people feel about stuff. Obviously there is still a place for in depth research, surveys, focus groups and that sort of thing, but it doesn’t have to be the be-all and end-all and councils shouldn’t be afraid of keeping things informal.

This was an interesting session, led by Emma Langman of Progression Partnership. It was essentially a discussion session about leadership, where Emma posed some questions and things to think about to the group. Some robust discussion then took place and I think there may have been some confusion about the purpose of the session – Emma certainly didn’t claim to have any answers or solutions, which I think may have frustrated some of those who attended hoping for some revelations.

I do think that this is a subject that needs discussing though. The challenges faced in the public sector will necessitate a change in organisational culture and that has to be set from those at the top, which will mean a shift from traditional command and control style leadership to a more flexible open approach, such as that described by Charlene Li in her recent book. Indeed this is the type of leadership already being demonstrated by Mark Lloyd at Cambridgeshire County Council and others.

How this behaviour and attitude can be spread throughout the sector, and encouraged in places where it isn’t already happening, I’m really not sure – which may be why most people left this session with more questions than answers in their heads. 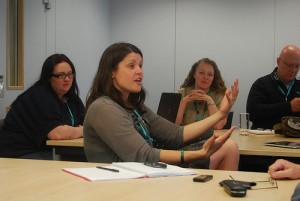 Dave Briggs runs Kind of Digital, an online innovation agency helping organisations make themselves more interesting using the web. He's been writing this blog since 2004 and still isn't bored.
View all posts by Dave →
This entry was posted in Events and tagged lgcyh, local government, localgovcamp, ukgovcamp. Bookmark the permalink.

13 Responses to Rounding up LocalGovCamp YH