This is the first of the series of guest posts here at DavePress, which will be coming each Wednesday for the next few weeks… Many thans to Sarah for taking the time out to write this!

Less than a month ago, a bunch of designers, developers, business brains and creative entrepreneurs who had never met before, came together and worked on Scotland’s first Social Innovation Camp. Sicamp, (for the tweeters out there), is in their own words;

… an experiment in creating social innovations for the digital age. We think the web and related technologies hold huge potential to change some pretty fundamental stuff: how people hold those in positions of power accountable; who they rely on to provide the services they need to live healthy, happy lives; or how they make a difference to something that affects them

And so, under the technical lights of the Caledonian Saltire centre in Glasgow, 6 ideas were investigated, brainstormed, developed and coded in under 48 hours, then pitched to a dragons den style panel. The winners were awarded a start up fund, branding workshops and free development time.

Mypolice was the winner, a back of the envelope idea I had months ago after a friend didn’t have an independent and fair channel to express her feedback to the police. Furthermore, she had suggestions for how her experience could have been improved, but again felt there was nowhere to express this.

So my team at sicamp came up with Mypolice.org. It is a web-based service that fosters constructive, collaborative communication between communities and the police forces that serve them. We offer the public a platform to tell their stories about their experiences with the police and suggest ways for their local police station to improve. We use mapping tools to geographically organise the information, so you can find out what your community is talking and concerned about.

Design can help us in the public services to be more innovative. We need to be conscious that today’s problems are just not going to be addressed by yesterday’s ideas and yesterday’s solutions; because the problems that we’re now facing, and the problems that we’re going to go on facing for the next five or ten years, are not going to be solved by the better delivery of more responsive services certainly if we do that in the traditional style. We need responses which are much more joined up, which are much more about influencing behaviour; we need a whole new approach to public policy over the 10 years – Sir Micheal Birchard, Chairman, Design Council

We will be taking an approach to our project which uses various design tools and techniques to help us make informed decisions. We are hoping to work on a regeneration scheme in Glasgow where we will be holding focus groups and interviews with the community and observing their environments, then use this as a case study to approach police stations. We want them to work with us and get involved in some co-design workshops with the public to really get to grips with how mypolice could work best for both sides and move forward our current idea. We want mypolice.org to become a valuable tool for the police and help them to improve and address issues within their policing areas. Through these steps, we also want to come up with other ways in which mypolice can be accessed, so we’re not alienating users who are not digitally engaged.

To be honest though, it really is an uphill struggle. First of all, we’re talking about using ‘social media’ tools that at the moment a majority of police organisations don’t quite understand and aren’t using yet. We’d like to change this and show them what all this web 2.0 malarkey is about; That social media doesn’t just mean youtube or facebook and pictures of teenagers drinking underage but that there are a whole variety of tools out there to help us connect, organise, collaborate, vote etc in more inventive ways than ever before.

It’s going to take a while to do this convincing but we’ve been talking to some interesting people already, including the head of the Scottish Police Federation and members of the Neighbourhood Policing Improvement agency. What we create needs to work with the police, not against, so we’re being very careful that the site doesn’t become a floodgate for insult. We want the feedback to be constructive, including a space for thank you comments which will act as a great morale booster. We want to remain independent from the police, but we don’t want to alienate them so we will be offering mypolice to them as a service they can buy into, similar to how the NHS Patient Opinion model works.

It is an exciting push in the direction of using social media within a public sector organisation. We’re not just using social media because it is the latest hot topic in the government. We’re using the tools to empower citizens to collectively make decisions on how their local area should be policed.
If we can convince the police that our idea can add value to their service, reduce the time they currently spend ‘engaging’ with the public and improve relationships with the communities they serve, all at the same time, we’ll be looking at some pretty big changes and perhaps a step towards giving more power to the people.

New technologies are changing the way we engage communities, deliver our public services, participate in government and campaign for change, are such an institution who are so policy heavy ready for it? 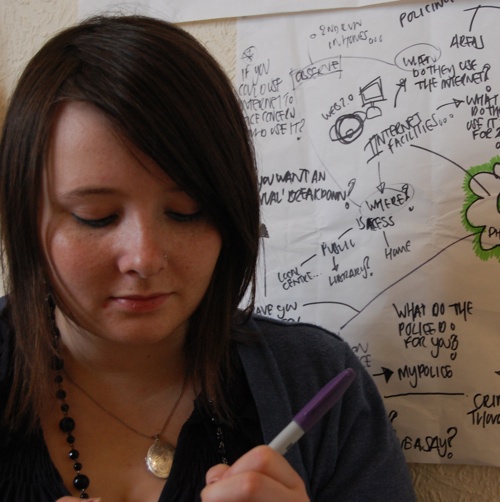 Sarah Drummond is project managing mypolice and is a recent graduate of the Glasgow School of Art. Her expertise lies in design thinking and designing services for both private and public sectors. Sarah has worked as a designer with Skills Development Scotland, leading the design process and project from beginning to end to create an educational online platform ‘My Learning Pod’.   She will be undertaking a Masters at the GSA with SDS this year.  She has also been recognised for her design skills winning most promising GSA Product Design student in 2008 and the first Medici Service Design Medal in 2009.

This entry was posted in Guest post and tagged mypolice, police, scotweb2, sicamp. Bookmark the permalink.