For the last couple of months I’ve been playing around with a Lenovo Ideapad S205. It’s a slightly bigger than a netbook machine that runs Windows 7. 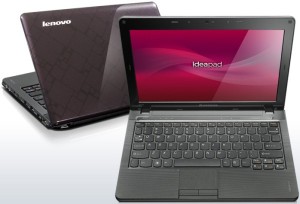 I’ve been a pretty dedicated Mac user for the last five years or so, but have been tempted to switch back to Windows for a couple of reasons. One is I’m increasingly uncomfortable with the way Apple is starting to make decisions for me in terms of how I use my computer, and what services and software I should be using. I’m quite happy with this sort of control on my phone or tablet, but it feels wrong on a more traditional computing device – I don’t want an iOS type experience on my laptop.

Secondly, all my customers are in the public sector, and they all use Windows. Even though I can use Microsoft Office on my Mac, there are still loads of problems in opening and editing documents with clients, and it’s a real pain. As well as that, I kind of feel a duty to share the same platform as my customer base.

But, I didn’t want to spend a load of money on a new laptop that I hated, so I decided to get something cheaper that would nonetheless help me make a decision as to whether I would want to return to using a PC rather than a Mac. The machine I went for was the Ideapad S205.

Firstly, it’s cheap – less than £300 from PC World the last time I checked. It has a screen that’s 11″ – so slightly bigger than your average netbook. This extra space also means a larger keyboard than you often get on these small machines, and it’s a lovely thing to type on. Not only that but the screen has a decent resolution on it, so it isn’t filled up with enormous icons that makes it impossible to use.

The other winning thing about the S205 is that it has a pretty grunty 4gb of memory. Often these smaller machines have only around 1gb and that makes running big applications, or several at once, pretty slow going.

There are a couple of downsides to the S205 though and these make it unlikely to become my everyday computer. Firstly, the 320gb hard drive is spacious (not that I really need that for a work laptop) but it’s an old school drive with actual moving bits. Once you have had a machine that just runs off a solid state drive, as I have with the MacBook Air recently, you don’t want to go back to the old, slow way of doing things.

The second issue is one of processing power, and while the memory on the S205 is good, the processor is not exactly rocket-powered. Fine for word processing and browsing and so on, but video calls on Skype slowed things down to a crawl and it really struggled.

A couple of things I noticed about the difference between the Windows and Mac platforms. One is the sheer amount of crud that comes pre-installed on a Windows machine – it took me over an hour to delete all the demos and trials of software I didn’t want from the machine, and removing all the unnecessary icons from the desktop. A real pain!

Secondly, software on Windows just isn’t as easy to use as that on a Mac. I’m still to find, for example, an FTP client on Windows that doesn’t have 3,000 icons on the screen. My Mac equivalent, Transmit, has a beautifully clean interface, which gets out of the way and lets you get with with what you want to do. This is true of lots of apps, and even the Windows interface itself – which to be fair in version 7 is much improved on Vista, etc.

So overall, for most folk who want a cheap but good performing laptop, the S205 is an excellent choice. It’s no replacement for my Mac, but then at less than a quarter of the price, you wouldn’t expect it to be. It also hasn’t quite persuaded me to switch platforms either, just yet.

Dave Briggs runs Kind of Digital, an online innovation agency helping organisations make themselves more interesting using the web. He's been writing this blog since 2004 and still isn't bored.
View all posts by Dave →
This entry was posted in Hardware and tagged laptop, lenovo, netbook, s205. Bookmark the permalink.