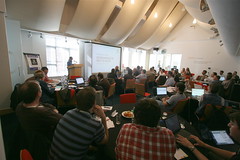 I am typing most of this on the train back from Birmingham, where I have been attending WordCampUK, a two day conference on all things to do with the greatest online publishing platform, like, ever. It was great to meet new folk, and friends too and as always, the value for me was in the conversations snatched over a cup of tea rather than the official sessions themselves.

Part of this was because WordCampUK was a curiously formal affair, with a proper agenda and with everyone attending all the same sessions, by and large. It was, I think it is fair to say, a lot more word than camp. One thing I couldn’t really understand was that there was a room available that wasn’t used at all, that would have been perfect as a breakout room for people to have off the cuff discussions and practical sessions.

I suppose it is a rather peculiar thing to try and form an event around a platform – the one thing we all had in common was the tool we use to get lots of wildly different stuff done. Finding common ground was therefore always going to be tricky, which made the lack of an official breakout space more of an issue.

Something that could be improved for next time would definitely be to introduce some flexibility into the agenda – at least to make people feel that they are able to leave a session in the main space if they don’t think it is really for them. There also needs to be enough room for manoeuvre in the sessions themselves, to let them fly off in a different direction than may have been originally intended.

The one session that was clearly missing was a show-and-tell – “Cool Stuff I’ve Done With WordPress” – give everyone who wants it five minutes to show off something they have done. Simon Dickson did a bit of this during his great session – the only one that really had everyone buzzing at the end. Presenting is clearly not as easy as it seems.

Some other positive stuff:

Some stuff needs to be done to develop the community, to draw others in that couldn’t make the event and to really make the most of the connections being made.

So well done to those who organised the event, but I guess the real work starts now.

I’m gutted I couldn’t make it but kept up with all the tweets for much of the weekend!

The organiser(s) did a great job but it was very rushed, it was only first thought up a couple of months ago. Before The Studio was found & confirmed, I had wanted to suggest pushing it back a few months, but I’m pleased it did all manage to come together very quickly in the end.

Likewise gutted about not making it – will definitely look out for the next one – or even an informal meet up like the Brum-bloggers – was there much WPMU chat?

Caspar – big shame you couldn’t be there, especially after helping organise it. Props to the folk do got it together so quickly, but next time it would be better to plan a little more, especially around the content, speakers and structure of the event.

Paul – very little on WPMU, surprising as BBpress had it’s own slot!

By next year I think they’ll be a lot to say about WPMU and BuddyPress… Still early days I guess. More camp than word next time definitely, but given the time constraints, it all came together very well!!! Some great memories and I learnt lots.