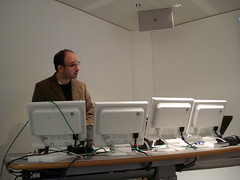 An interesting point made by Tom Steinberg of MySociety at barcampukgovweb was when he was asked about the best platform to use to operate an online working group. An example of a working group like this could be those who attended the barcamp - how could they manage their interactions online in the future?

Tom’s response was that the mailing list was the best way for a group of people to communicate online, and so for the barcampers, the best thing to do would be to stick with the Google Group already created (by me, heh heh). I chipped in at this point with my theory as to why email lists seem to work well, especially with government types. It’s because email is work, and the web is not work. People are now so used to working through their email, that they are quite happy for it to be used for a number of purposes, whether it be news alerts (more popular than RSS feeds) or community interactions (more popular than social networks).

There are problems with email lists though, especially for community based collaborative efforts. Scalability is a major issue, with only 25-30 regular contributors being feasible on a list. The second is when individual work streams start to develop, which some list subscribers just aren’t interested in. Thirdly, you can’t work collaboratively on documents, and at that point additional services have to start to be used.

Leave your comments here. All first time comments are moderated, link heavy ones too. All comments should appear within a day, if they don't it might be because they are offensive or stupid.