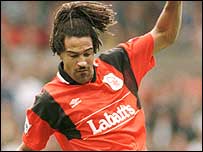 At 24 years of age, Jason Lee was living the dream of every professional footballer.

The year was 1995, Lee was plying his trade with Nottingham Forest in the Premiership and the Uefa Cup and his dreadlocked hairstyle and ferocious commitment to the cause were making him a cult hero at the City Ground.

But when a poor run of form came along, Lee’s world threatened to come crashing down around him.

Now, 12 years on and at his 13th professional club, Lee is making waves on the other side of the River Trent as he propels Notts County towards a League Two promotion push.