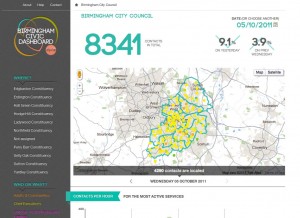 The Birmingham Civic Dashboard is a neat project from the City Council that reports the requests made for services from the organisation and visualises them in interesting ways, such as by plotting them on a map.

It was funded by NESTA as part of the Make It Local programme, which also produced such excellence as the Sutton Bookswap and Kirklees’ Who Owns My Neighbourhood?

The Civic Dashboard aims to:

…make public, data relating to what issues people are reporting to the council. The belief being that when looked at on a map and in real-time the accumulation of data would provide and insight into the issues facing both the citizens of Birmingham and the council itself as it responds to the issues raised.