The revolution will not be comma separated

I had a fun day yesterday at the Civil Service Fast Stream conference, which was focusing on big society type stuff. I was running a session on open government, with a concentration on open data.

As a bit of fun, while we were talking I asked the members of the group to draw what occurred to them when thinking about open data. 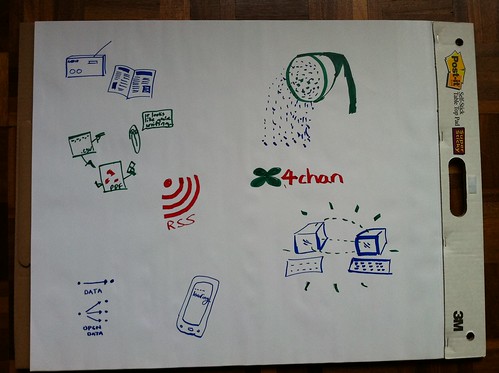 If you click the photo, you’ll be taken to the original on Flickr, which I have annotated with what I remember of the descriptions from the artists.

Once again, in a conversation about open data, I ended up coming across as being somewhat sceptical.

I’m all in favour of transparency in government, and I’m also very much in favour of public services publishing their information in accessible formats.

What I’m not so sure about are some of the claims made for the potential of open data to transform government, and its relationship with citizens.

I can’t see where the business model is for third parties to create applications based on this data, unless government itself pays. I’m also unconvinced that there are enough people around with the skills (and indeed the inclination) to either be effective armchair auditors or civic hackers all over the country.

I suspect the biggest users of open data will end up being journalists, and the work that newspapers such as The Guardian are already doing seems to support this. It’s a good thing, but hardly sees a great redrawing of the traditional ways of doing things.

The other area where I can see benefit coming from an openness around information assets and a different attitude towards data is in the use of it by government itself. I agree with Andrea DiMaio that if open government is to become a reality, it is going to happen through the actions of public servants themselves, rather than from activists on the outside.

So, transparency is important. There are opportunities around open data, as well as challenges. Right now, though, I struggle to see how dramatic change will happen as a result of publishing data.

I’d be very happy to be proven wrong, though!

5 Responses to The revolution will not be comma separated