I don’t seem to write much about new tools very often, which is a shame, as playing with stuff is one of my favourite things in the world. Anyway, here’s one I cam across this morning.

I was alerted to SnapGroups thanks to ReadWriteWeb. It’s a neat little service that mashes up real time status updates – in other words, Twitter – with traditional forums. 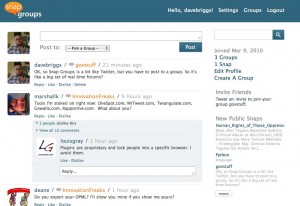 So, rather than just posting your message out into the big list of what everyone is writing, instead, you post to specific groups, which either you have created, or where you join one created by others. You can’t, as far as I can tell, post one message to more than one group. Probably good for spammy reasons, but it could get annoying if something you have to say is relevant to several groups of people.

My SnapGroups profile is here, and I created a group called govstuff here to have a play. Feel free to join in!

So SnapGroups is pretty neat, but probably not, to my mind, sufficiently better than what is already out there to disrupt people’s established patterns of behaviour, which is to go to Twitter.

However, the guy behind the service, Mark Fletcher, has some serious background – he built the software that turned into Yahoo! Groups, and was also responsible for Bloglines before Ask bought it a few years ago. So maybe there is more to this – I’ll certainly be keeping an eye on it.