Online collaboration in the workplace – thoughts and concerns

I had a mixed day yesterday at the Online Information conference, which is excellently led by Steve Dale. The good bits were the sessions I attended and the chance to meet up with good friends, old and new. The less good bit was the panel I was chairing, which was a little challenging to say the least!

Having said that, one of the participants was truly excellent – Andrew Walsh from the University of Huddersfield, who spoke about their efforts to use competitive gaming ideas to encourage greater use of the library with a project called Lemon Tree.

Now, I’m not all that convinced about the use of ‘gamification’ to drive engagement, but there’s no doubt that it really works for many people. I do rather fear for those that get left behind though.

Anyway, one of the more interesting sessions at the conference was on ‘enterprise 2.0′ or the use of social technology in the workplace to improve collaboration and knowledge sharing. Now, I love this stuff, and honestly believe that making social tools available to people to help them do their jobs can have a positive impact on effectiveness and efficiency.

I do have concerns though, particularly based on what a couple of the speakers were talking about (I ought to point out now that I am definitely not referring to Jemima Gibbons whose talk on open leadership was great). I worry that the wrong emphasis is being made when people discuss this issue, in terms of focusing in on organisational objectives and needs and ignoring what is surely central to making this work – the users themselves.

Much is made of the fact that due to the consumerisation of technology, workers are more likely to expect that social tools are available to them at work. I’d agree with this, but I think it is more likely that they expect and desire to use tools of their own choosing and not some corporately imposed knowledge management solution.

In other words, I suspect in this area employees would want to use the tools they like using, for their own purposes. There’s nothing wrong with this – I’m not suggesting that people just want to waste time, or spend their working day expanding their LinkedIn network – but I do think it more important that organisations allow staff access to the tools they want to do their jobs, and then find a way of  managing it all – as opposed to procuring a big system to do ‘social’ and assuming people will want to use it.

So the key for me with the implementation and adoption  of social technology in the workplace is getting people to be bothered to use it. Organisations shouldn’t, in my view, waste their time trying to get everyone on board, but instead focus on the innovative types who care enough about their work to want to share and pool knowledge and intelligence. After all, one great example of cross sector collaboration is the Communities of Practice in local government (and beyond) in the UK, but even with the hundred-odd thousand users on that platform, it’s still a tiny fraction of the overall potential audience.

The fundamental problem with knowledge sharing at work, whether using social technology or not, is convincing people it is in their interests to do it. After all, the stuff one knows is what makes us useful and in a world of rising unemployment, it would take a brave soul to give that away.

I realise I have raised a lot of problems here and not provided many answers. I’ll chew it over and maybe come up with some more positive stuff in a later post. I’d be interested in your views though, of course.

Edit: and as if by magic, Headshift’s James Dellow has blogged today on Does Viral Adoption of Enterprise Social Business Software work? 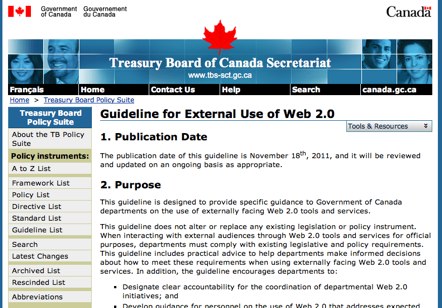 The Canadian government has shared their – somewhat lengthy – “Guideline for External Use of Web 2.0″ online.

Well worth checking out if you are designing your own organisation’s policy on this stuff.

What happened to November?

April may well be the cruellest month, but for me November was the busiest – and the illest (as in, I’ve been poorly. I’m not starting to talk “street”, you’ll be pleased to know*) as well.

Kind of Digital seems to have had time to get settled in now, and we’ve so much work on it’s meaning that I have no time for blogging or emailing any more, which is a real shame – even with the team growing all the time. I’m looking forward to some time over Christmas to get my thoughts together and start publishing here a bit more often.

Here’s a quick run through some of the stuff we’ve been doing this month:

That’s probably about it. We’ve another couple of busy weeks in December coming up and then things wind down for the festive period. I’m looking forward to it!

I’ve written a couple of times about the WordPress based ideas crowdsourcing tool we’ve been working on at Kind of Digital, which is called CiviCrowd. We’re delighted that it’s now being used out in the open by South Holland District Council, to find the ideas people have to improve their local community. 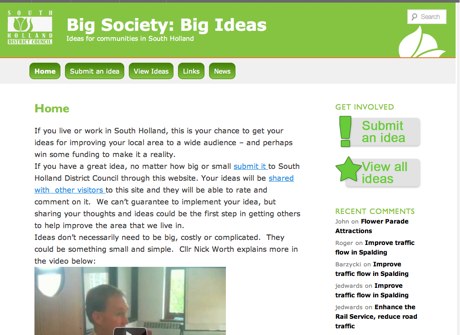 Ideas are entered by users using a simple online form, moderated, and then when published others can comment on them, rate them and share them on their own networks.

Part of the driver for this project is that all councillors in South Holland now have a designated ward budget to spend on local projects. This site is seen as being a key way of getting people to share those ideas in a simple and straightforward way.

There are already a bunch of ideas on the site, and that’s before it has been promoted in the Council newsletter and the local paper – that should be happening in the next couple of weeks.

If there’s anyone else out there that could use a site like this – you know where I am!

What I’ve been reading

I find this stuff so that you don’t have to.

You can find all my bookmarks on Pinboard.