I’m the (or rather now, ‘a’, but more on that later) facilitator at an online community of practice for social media and online collaboration using the Communities of Practice platform put together by Steve Dale at the Improvement and Development Agency. It’s ostensibly for local government, but I like to operate a big tent, and so anyone with a public sector interest can come along.

Yesterday we ran our first face-to-face meeting ludicrously entitled the ‘Big Day Out’. Given that it was held where I work, at the LSC National Office in Coventry, it wasn’t much of a day out for me, but hey! who cares. I took a few photos, some of which are below, the rest here.

The day ran pretty well, starting with a short and probably quite boring introduction from me:

We then moved onto more interesting stuff, notably chats from Hadley Beeman and Shane McCracken on what they have been up to recently. 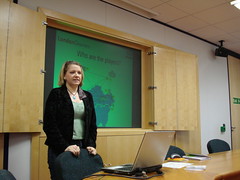 Later on we played a little game, a cut-down version of David Wilcox’s Social Media Game - although as Tim Davies pointed out mine is best overall because the cards are laminated. Two teams set each other scenarios which they had to solve using different social media and web 2.0 tools. 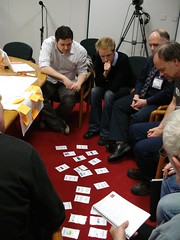 I think it was a useful exercise as everyone got to learn something about a web service they didn’t know existed before.

Next up was Steve Dale, chatting to us about the latest developments tech-wise on the CoP platform. There’s going to be some really interesting new features added, which will at the very least make facilitating the communities an awful lot easier. 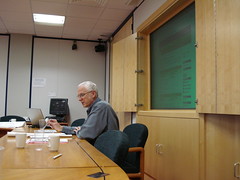 Finally we had a little chat about the future of the Community, what we could do to improve participation and what we got out of it all. Michael Norton of the IDeA had a wicked-cool idea about setting group social media challenges, making us go out and try new stuff, and reporting back on our findings. One is already under way on YouTube. Nice one!

Throughout the day, the ever resourceful Carl Letman was doing a great job of videoing some of the action, and soon I should be able to post some highlights up here. If you need any video work doing, whether on or offline, Carl really is your man.

I also requested a bit of help of the facilitation side, and thankfully I got a great response from Michael, Hadley, Steve and Carl. So hopefully we should be able to keep the Community active and ensure that everyone gets the support they need.

What was also nice was that everyone said they would like to do it again. Hopefully if the word gets out that it was a fun day, then more folk might be encouraged to come along. Noel Hatch of Kent County Council has already offered to host, and suggested we could run it virtually in parallel using Second Life. He’s mad. Let’s do it.