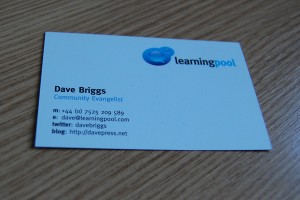 My role at Learning Pool is a hard one to define exactly. A couple of weeks ago, we had a big company meeting where everyone got together to discuss the last year’s efforts, and what we want to achieve in 10/11.

At one point Paul asked everyone in the room to raise their hands if they knew what I did for the company. I don’t think anyone raised their hands. I know I didn’t.

That’s ok, though, and I stood up and rather incoherently tried to explain it all. I don’t think I did a great job, but I do think I managed to get across that it isn’t just about going to conferences.

My job title is Community Evangelist, and the first thing to say is that I’m not a Technology Evangelist. The role of technology evangelist is a pretty well established one in the techie sphere, pioneered by Guy Kawasaki at Apple in the 80s. Robert Scoble fulfilled a similar role for Microsoft in the mid-noughties.

This is important, because I’m a newcomer to Learning Pool’s core technology, based on Moodle, and would probably be a pretty terrible evangelist for it. Not only that, but my actual technical knowledge is sketchy at best, and I’m as good an example as any that a little knowledge can be a very dangerous thing.

Instead of technology, my focus is people – as individuals, members of communities of practice or interest, and organisations. My aim is to promote the behaviour and culture of the internet: collaboration, openness, generosity, curiosity.

So what do I actually do?

So that’s a brief run through of what I do. In practice, I spend a lot of time reading, mainly off the screen and mainly within Google Reader, and a lot of time out and about meeting people. There are worse ways of making a living.

And I think they are very lucky to have you.

We are indeed! – I do a lot of the “people meeting” stuff with Dave and as well as everything else – we have great fun. As we often say to each other when we’re out & about – it isn’t really like work, is it?

Good job too. Sure the fellow wouldn’t know real work if it hit him in the face

… and you do it so well! Do you need a company to be a community evangelist …? What I mean is, (how) does the back up from the other roles make a big difference? I’m still trying to avoid having a proper job.

I’m a self-employed personal evangelist. Sadly my employer doesn’t pay me much.

@Shane – you are far too kind!

@David – good question. It makes a difference for me – the business development side of things is what adds a real frisson of excitement to the whole thing. Plus being part of a wider team gives you a) admin and technical backup which frees up time for the fun stuff; b) a salary, which means you can afford to spend time at the conferences etc – something I really struggled with when freelance; c) a sense of defined purpose – fundamentally my job is to make money for Learning Pool, however tangential my role in it actually is. Having that helps focus the mind, and makes it easier to decide if an activity is worthwhile or not.

@joe – yes, as I mentioned above, it was a problem I had when I was freelance. The convening, curating and conferencing took a back seat to paid work – hence why the decision to give up a little freedom (although, luckily, in my case hardly any at all) and become an employee again was actually quite easy.