One of the highlights of last Wednesday’s LGComms event was hearing about Coventry City Council’s Facebook page. 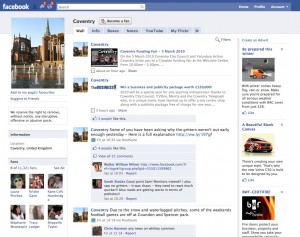 If you click to see the larger image, you’ll notice that the page has 11,321 fans (as at the time of writing).

Remarkable stuff. As I wrote, quite a while ago now, it’s tricky to use Facebook when you are the sort of organisation nobody loves to love. Who wants to be a fan of their local authority? No-one I know.

How did Ally Hook and colleagues manage this feat? Pretty simple. It’s not the Council’s FB page…it’s the city’s. Tapping into civic pride is a great way of getting people to engage. Using your Facebook page to provide up to date information on weather related issues during snowpocalypse probably helps too.

Facebook will continue to be incredibly useful for those wishing to engage with citizens. It’s where the people are, and the numbers keep growing. Just because it has been around for a while shouldn’t mean us social media geeks look down on it. Is it time you took another look at Facebook?

I think I’ve mentioned this before, but it’s very easy for somewhere like Coventry to drop the ‘council’ bit from their page name, but for districts and boroughs with more than one distinct urban centre it’s difficult. We’ve got three of them, not to mention countless villages who don’t necessarily identify with one town or city.

Having said that, the work done on the Coventry page is impressive, it’s even spurred me into reviving our dormant fan page. We’re doing OK so far, with 57 fans, but it’s baby steps!