That was the ukgc10 that was 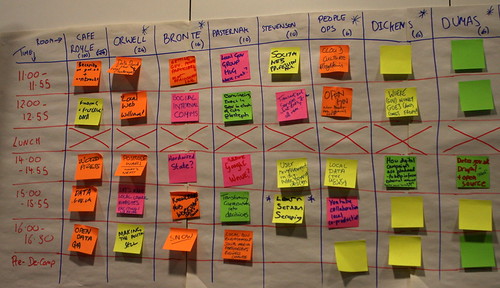 The third annual unconference, or GovCamp, for government types went pretty well. Two main factors, marvellous and generous hosting by Google, and a terrific level of participation from pretty much everyone who attended. What’s more, nearly everyone stayed til the end!

Massive thanks to the other sponsors, including Huddle, Opportunity Links, Learning Pool, Boilerhouse, IDeA, Polywonk, Timetric, the Dextrous Web and probably others.

Huge props too to Tim Davies and Lloyd Davis for organising the agenda setting bit of the day – it really helped everything go smoothly.

Highlights for me were the sessions of getting internal communication and collaboration right – which resulted in the prospect of a spinoff event dedicated to these issues – and a session on discussing innovation in public services.

As always, how do we follow up on all this goodwill and enthusiasm? Let’s try by:

There’s lots of coverage online already, and will be more, I’m sure. I’ll keep the following list as up to date as I can:

David Wilcox grabbed Jeremy Gould and I before we left. It was Jeremy who kicked off this whole thing two years ago, and it’s been a privilege – as well as a pain in the arse – to have picked things up this year. Had Jeremy not stuck his neck out back then, we wouldn’t be where we are today. Anyway, enough brown nosing, here’s David’s video:

Get DavePress by email, or RSS. While you're at it, here's some links to some of my social networking stuff.

5 Responses to That was the ukgc10 that was

This blog is written mostly by Dave Briggs, who runs Kind of Digital - an online innovation agency.

Get DavePress by email, or RSS. While you're at it, here's some links to some of my social networking stuff.