The snow has made it a tricky week this week, with transport problems and the local school being closed. What’s more, just outside Cambridge, the snow is still falling on DavePress Towers. 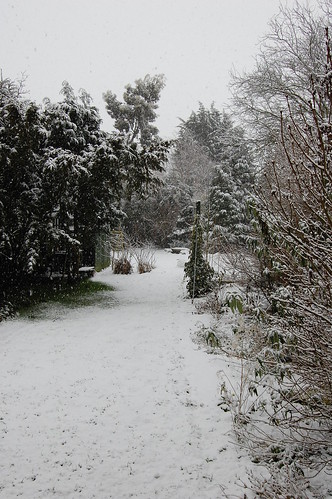 It’s hasn’t all been bad news, though. As Tom Watson reports, the confusion around the schools closures spurred DirectGov’s innovation dudes into swift action. Whilst the site is down right now for maintenence, this type of proof-of-concept prototyping is just what government needs to test what works and what doesn’t before project managers and the like get their claws into things.

Another remarkable outcome of the weather was the use of the #uksnow hashtag and snow level rating system which spread on twitter. Paul Clarke tells the story:

Fresh from yesterday’s UK Government Web BarCamp, #ukgc09 (worth looking at ukgovweb.org), my mind was pretty open to data sets and what could be done with them. Except the contents of #uksnow wasn’t data – at least nothing that could be readily useable.

Time for a suggestion on standards. I’d put my own tweet out about weather conditions in RH1, so quickly came up with a format: #uksnow [1st part of postcode] [n/10]; as a simple way of getting the holy trinity of mashable data together. Place, condition and time (from Twitter’s own logging). Bingo – three things that could readily be parsed by someone with the time and inclination to do so. And then analysed, mapped, mashed, shared, whatever…

What’s really interesting is the way that Twitter is starting to be used effectively as a command line. People seem to have no problem typing data in conforming to a form of markup so that their contributions can be parsed and mashed up.