Having an iPhone has really liberated me in term of the way that I use Flickr. This would be true of any phone with decent internet connectivity, and indeed there are plenty of handsets out there with better camera functionality than the iPhone. But the ability to easily take a picture and upload it to Flickr via email in a matter of seconds is fantastic – like this, which I took in Chipping Norton yesterday: 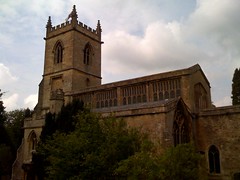 This has led me to have a bit of a wonder about Flickr and where the value of it lies. One thing Flickr does brilliantly is to create a community of photographers, from amateurs through to seasoned professionals, who discuss one another’s photos and chat about lenses, resolutions and whatnot.

But Flickr has another community too – people out on the streets with cameraphones, who don’t really care about the angles of the shots they are taking, wh just want to capture the moment and share it online. Such users can easily find themselves at the forefront of important events, thrust into the role of citizen journalist.

These two communities exist side-by-side rather well, despite the fact that they are using the same service for quite different purposes. Which is more important to Flickr, I wonder – and which to society?