Posted by Dave in Events

This is probably going to be the first post of many as I try and get my head around the barcamp, what it all meant, and what happens now. The latter is the most important, I feel.

The day went well, everyone got along famously and it was brilliant - and worth the train fare - just to meet some really cool people for the first time, like Jeremy Gould, Lloyd Davies, David Wilcox, Jenny Brown, Tim Davies, and (finally!) Simon Dickson - who is, as I expected, a real livewire and a truly top guy. I also got to catch up with Steve Dale - always a joy - and Nick Booth, who is planning the next meeting of the Birmingham Social Media Club, as I think it is now going to be called. What was interesting was that this group of folk got on very well, and a germ of an idea was floating about with regard to meeting up more regularly, working more collaboratively to try and push forward our shared agenda, which is to get the public sector using the web properly. 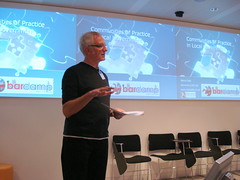 One thing I am pleased with is the Pageflakes page I put together, which seems to have done a good job of pulling together the outputs from the day - photos on flickr (this one is of Steve Dale talking CoPs), for example, and blog posts are popping up in the Google Blog Search and Technorati feeds. Cool. Perhaps this is the future of distributed online communities: use the tools you are comfortable with and build the community through common tags and RSS feeds. Why should I have to write a blog post about the barcamp, for example, on any platform other than my own blog? I don’t want or need another account, or site to maintain - just let me use the one I already have in a social way.

Two questions popped into my head during the day though. Neither were answered - which is perhaps not surprising and not necessarily a bad thing - but nor were they asked, which might be a bigger issue. Firstly: what’s the big idea? Where are we going with this? What do we want out of it? Secondly: what are we actually going to do?

There is talk of a new ‘Digital People’ project, involving those inside gov as well as those outside who have services and skills to offer, which may help to take the agenda forward. It should certainly cement the relationships which have begun to be built at the barcamp. But what’s the endgame here? What’s the point? Consultation is certainly a possibility, and perhaps political engagement too. But we need a clear idea of what we want to achieve before we can even begin to think about how that might happen.

Here are some posts I have spotted so far following the event: Tim Davies, Feargal Hogan… more to be added as they emerge.

9 Responses to “Thoughts from barcampukgovweb”